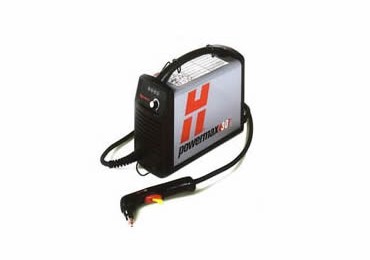 The Powermax 30 plasma metal cutter is one of the very first handheld plasma cutting system by Hypertherm and comes with 2 different versions, the standard and deluxe model. One of the success stories behind this particular version is that it’s extremely portable weighing at only 20 pounds, making it super easy to carry from site to site.

This is also backed by the Auto Voltage ability which automatically adapts to different power input from 120-230V with little effort.

Some of the features that’s worthy of a mention about this plasma cutter would be the factory pre-set air regulator, which ensures the system runs in peak performance at most times. Along with the DSP (Digital Signal Processing) inverter technology, there is no denying that this cutter will outclass most systems within the same price range. The unit uses the durable T30V torch, which is considered to be one of the best in the industry and is backed by a full 1 year warranty.

Deluxe Version: Everything that comes with the standard version plus a rugged carrying case, consumable kit, shoulder strap, cutting gloves and cutting guide.

Back to Hypertherm Reviews

What do we think?

One of the standout feature of this machine has to be it’s weight at just 9kg. In saying that, not much power has been lost because of this making it ideal for fast quick jobs as well as travelling to numerous sites with ease. Hypertherm is also known to produce some of the most durable consumables so you really can’t go wrong with this one, especially if you’re only doing light sheet applications.